The Department will remove any information collected on country of birth and nationality during the autumn census that parents wish to have retracted, Lord Nash confirmed in a written answer in the House of Lords on November 24 HL3296:
“If parents have previously provided this information to schools and now wish to retract it, they should inform the school of this decision. For such cases, schools can update their systems to show a parent has refused to provide the information and this will be collected within the next school census, which is due on the 19th January.“Where a parent has exercised this right, the Department will remove any information collected on country of birth and nationality during the autumn census.”
The Department needs to clarify now:
1) How will the DfE ensure all parents and pupils be told? Will every parent and pupil be written to?
Forms we have both been sent and seen online, failed and still fail fair processing (the ABC campaign has also posted a small selection of what they have received) how will this message reach parents and pupils to be meaningful and ensure it reaches everyone?
Nationality and country of birth data has been unfairly collected up and down the country. It is likely that millions of parents and pupils didn’t know that their data was being sent to the Department at all when it was already held from admissions data. They need to be given this opportunity so that the Department can legally keep the data under the Data Protection Act fair processing requirements.
2) How will this be delivered in practical terms and is it a one-off opportunity? What happens to parents who only find out at a later date that they could have withheld it?

Department for Education letter to the UK Statistics Authority

The recent Department for Education letter to the UK Statistics Authority made a statement on the school census data expansion and collection, telling UKSA that:
“This year’s school census has come under considerable scrutiny due to the new data items being collected on nationality, country of birth and English language proficiency.
“I would like to assure you, the public and users that these new data items are solely for the use of the Department for Education for research, statistics and analysis and are not shared beyond this.”
If the Department confirms that the DfE algorithm used to identify individuals matching names on the Home Office list of people they want the DfE to provide home address or school address on, will not be using nationality and country of birth, then we accept this statement is true. We await confirmation.
Given that many of the original reasons given for the data collection were around the linkage with other datasets and use in destinations data we will watch closely to see indeed that the data are “not shared beyond” use by the Department for Education.
We note that the UK Statistics Authority in its reply urges the Department for Education to set out plans for ongoing review and that maintaining public trust is essential, requiring an ongoing committment to communications and transparency including “clear communication of purpose”.

Publishing reviews of controls and processes we hope will shortly include all these Back Office uses which are yet to be included on the third party data release register. NHS Digital does this already in their register showing release of confidential medical records.
We await to hear what access controls, oversight and review processes the as yet unnamed “new database” will have that holds country-of-birth and nationality data and is to be kept separately from the National Pupil Database.

Latest on the Early Years census collection from Capita SIMS

The DfE has stopped the collection of country-of-birth, nationality and language data in the Early Years and Alternative Provision census, for on roll day January 19, 2017. 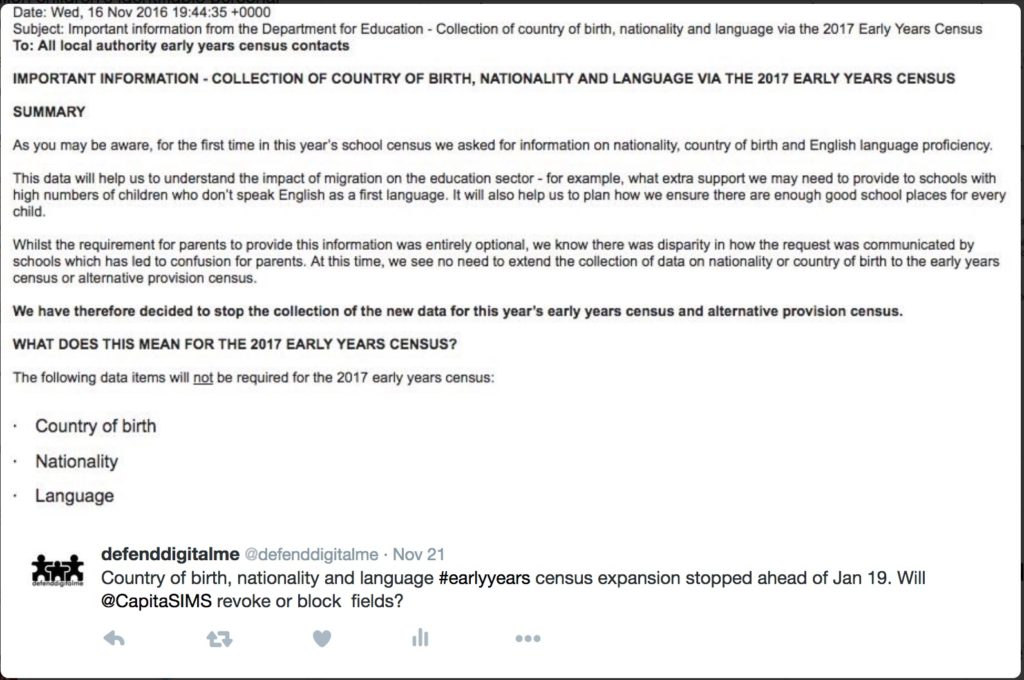 We have been told today by Capita SIMS: “As the latest DfE guidance doesn’t require country of birth, nationality and language data to be included in the 2017 Early Years census, we’re in the process of removing these fields from our early years census return. The changes will be in place before LAs are required to submit the census.
We’ll be following up with the Department and providers to confirm that all system providers will be doing the same.
The ABC Campaign and supporters continue to call for the destruction of all these poorly collected data and scrapping of the policy of collection for all children in all settings.

Ongoing work-in-progress on improving secure data use, transparency and fair processing to the public

The recent Department for Education letter to the UK Statistics Authority also outlines some of the recent changes to the National Pupil Database.
It confirms the DfE is working with the Office for National Statistics to make the National Pupil Database available through their Virtual Micro – DataLab (or a DfE – run process which mirrors much of it).
They are also exploring the potential for a ‘privacy controlling API’ to be built on top of NPD, working in partnership with the Open Data Institute to do discovery work and design to take this forward.
This will change the access model of how data users can access pupil data via what route. Current users can be seen, for the most part, retrospectively via the improved third-party register of identifiable pupil level data releases. The next update to the third-party register is due on November 30. Previous releases and what kind of data they include being sent to users own settings were up to March 2016.
We are pleased to see this progress towards a better privacy-preserving model of data use. Questions remain how it will look in practice and we have suggested modelling a mapping of current users’ requests to a future model would be helpful to support decison-making, change and communications.
The DfE updated sample privacy notice for schools to use while improved, (including for the first time the link to third parties’ register) still needs work to be clear to schools and all settings how pupil data is used. Many sites are unaware of the level of individual pupil level data that leaves their system. The next stage of improvement will be to make clear what data are collected for local only, versus national use and by whom.