The Department for Education (DfE) has confirmed that with immediate effect, country-of-birth and nationality data must no longer be collected for national use, in new 2018-19 school census guidance.
Schools “must no longer request this information from parents, or retain the data within their system, for purpose of transmitting to the department via the school census,” Schools Week reports.
We welcome the good news, as well as the recent improvement in transparency in the external data shares online register, that now publishes the numbers of children’s information handed over for Home Office and police purposes in the ongoing monthly data transfers.
However, schools have never been told that pupil data are being used for immigration enforcement purposes. Parents and children do not know that the transparency register exists and cannot be expected to go and look for it. Our externally commissioned survey of over 1,000 parents in February showed over 69% hadn’t heard of the National Pupil Database and knew that data could be passed out from it by third parties.
When will schools and families be told how their personal information are used?
Although the nationality and country of birth collection has been killed off, the monthly data transfer using children’s national school records continues and could well be expanded.
The Government most recently created an exemption in the Data Protection Act 2018 that removes data protection rights from all of us, to know how our personal data are used, if for immigration purposes.
On Tuesday March 13, Victoria Atkins MP, explained explicitly national pupil data is one area the  exemption will be used for embedding the secret policy put in place in 2015, that went undiscovered for a year. “If we know they have a child, we will seek from the Department for Education assistance to find the whereabouts of the child. That child has not committed a criminal offence, so I would be very concerned to ensure that the Home Office, Border Force or whoever else acted lawfully when seeking that data in order to enable them to find the parent or whoever is the responsible adult, as part of the immigration system.”
Departmental assurances are now insufficient that the nationality data collected will not be misused for this, when compared with what can be done based on the legislation and current policy.
You need only look at the recent Roma registry and policy plans announced in Italy, and the US stance on child separation and immigration, to understand that the Department for Education in England holds data that poses a serious risk of harm, should policy change here. It is profoundly naive to think that any future policy or government might not use children’s data in England similarly.
We expect data collected under SI 808/2018 to be destroyed at local, regional and national levels, given the over 25% not yet obtained and refusal rate, and compromise that creates for data quality — even assuming that the data given, are true, as well as failed fair processing in collection.
The DfE is already aware from the Information Commissioner’s Office, that continued use of the National Pupil Database for such purposes, is incompatible with the Data Protection law research exemptions the DfE relies on today.
This is not some abstract data policy, but about real, ongoing harm in children’s lives. We continue to work towards scrapping the law SI 808/2016, and the destruction of nationality and country of birth collected in the school census, to stop the misuse of public data, and start restoration of public trust.

Background
Timeline of Nationality and Country-of-Birth school census expansion: https://defenddigitalme.org/timeline-school-census/
The government’s U-turn follows recent attempts to challenge the data collection in the courts. In March, the campaign group Against Borders For Children and the human rights charity Liberty launched an appeal against the High Court’s initial refusal to allow them to take the case to judicial review.
The scandal in autumn 2016 over the new collection of nationality and country of birth hid the pre-existing but secret facts about a policy and MOU was put in place in 2015 to use pupil data in immigration enforcement, and support the hostile environment among its strategic aims. Expansion of the census was after all, only agreed as a compromise to fend off plans to ‘deprioritise’ migrant pupils school places.
The DfE hid the truth from the Star Chamber board when they were not told of the inclusion of “(Once collected) Nationality” in the then secret MOU, when they were asked to sign off the expansion of the school census data collection in November 2015.
The change came into effect without debate and from day one, its purposes were misrepresented by Ministers in both Houses. Secretive lawmaking is bad for everyone and public and professional trust in school census data will take time to recover.
The House of Lords agreed a regret motion in October 2016 on the expansion of the collection of pupil data: that this House regrets that information about pupils’ nationality and country of birth collected under the Education (Pupil Information) (England) (Miscellaneous Amendments) Regulations 2016 (Statutory Instrument 2016/808) could be used to help determine a child’s immigration status.
Campaigners and many individual teachers, children, parents, members of parliament and many people across the sector made sure since, that government know this move crossed an unacceptable line. 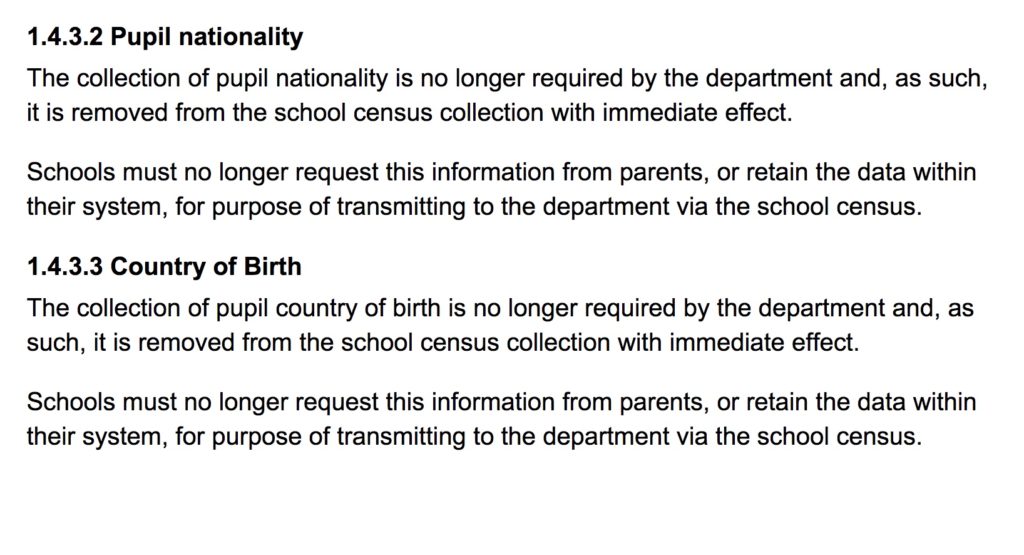