Victory in the Against Borders for Children campaign. School census nationality data destroyed after ICO audit.

We are pleased to have secured another win in the campaign to oppose the expansion of the school census in 2016 and its intended use. The nationality and country-of-birth data from millions of school children, has been deleted by the Department for Education. It followed a compulsory audit by the Information Commissioner in which it found failure to comply with the law. The Regulator ran a broad investigation in 2019-20 following complaints from us at Defend Digital Me and Liberty, and our concerns around the National Pupil Database.

The highly controversial data collection had already ended at the time of the ICO’s Audit in February 2020, but the audit findings included recommendations on the data the DfE had collected in relation to country-of-birth and nationality between autumn 2016 and summer 2018.

The Against Borders for Children coalition organised a highly successful boycott when the school census expansion began in 2016, in which the Department failed to obtain over 25% of pupil’s nationality. The collective action from a wide range of supporter organisations, parent, pupil, teacher and union members’ opposition was instrumental in ending the expansion. Since bringing the collection to an end in 2018, we have collectively campaigned for the data to be destroyed, worried that it could be used for its original purposes in secret.

The school census expansion had been downplayed by government Ministers at the time. The Department claimed that, “Collecting this data will help ensure our children receive the best possible education.” In July 2016, Schools Minister Nick Gibb told MPs, “The data will be collected solely for the Department’s internal use for the analytical, statistical and research purposes… There are currently no plans to share the data with other government departments.”

But there were more than plans. We exposed that the nationality data was to be shared with the Home Office as part of a wider datasharing monthly agreement, that was already live in July 2016 and is still operational. In July 2015 the DfE had already begun –in secret– regularly handing over children’s details from pupil records to the Home Office for Hostile Environment purposes. Details include names, date of birth, home and school addresses, after matching Home Office records to pupil details collected in the school census. We exposed in August 2016 that ‘nationality “once collected”’ was already listed in that live data-sharing agreement, and that the new data would become available to include in the monthly transfers for to 1,500 children a month.

The Against Borders for Children coalition has won several rounds in this fight to protect children from the Departments’ interferences, including scrapping of the data collection for 2-5 year olds before it began, getting assurances that the nationality data would not after all be passed to the Home Office, and the ending of the expanded collection in the school census in 2018 for 5-18 year olds. We also hoped processes would change after it was discovered that schools were being told to guess ethnicity data and the Government was forced to apologise over a question in the 2016 school census, after it became an international diplomatic incident. Italian ambassador Pasquale Terracciano criticised the data forms sent out by UK schools asking parents whether their child was “Italian”, “Italian-Sicilian” or “Italian-Neapolitan”.

After this latest victory, there is still work to be done.

We will first be working to ensure that the same data, is no longer retained at Local Authority, regional and local levels if collected in 2016-18 under the directions of the DfE.
More broadly, in autumn 2020, the Public Accounts Committee found that the Home Office “has no idea” of the impact of immigration policies. Asked how many and what type of interventions the Home Office made based on the pupil records, the Parliamentary Under-Secretary replied that the information, “is not readily available and could only be obtained at disproportionate cost.” Neither the Home Office or DfE takes responsibility for what happens to the children or families whose data they pass on.

So while the DfE stopped the collection of children’s nationality under pressure in 2018, and we welcome it has now deleted the data, now it must do more. It must scrap the law that ever allowed nationality to be collected in the first place, and end the monthly Home Office handovers.

Data protection law is not about protecting data per se, but about protecting people. If fixing the DfE data policy to be safe, lawful and transparent, means first destroying national datasets that are intended to be or are used to harm people, that are unlawfully collected or unlawfully retained, then so be it. This is an important decision on data retention, but much more change is still needed in fixing the National Pupil Database.

Data collected from children in schools is collected for educational purposes, and should be used in accordance with families’ reasonable expectations. When we polled parents in 2018, 69% said they’d not been told about the National Pupil Database at the DfE, and they did not know that their children’s identifying, sensitive, personal and confidential data was given away to third parties at all.

The Department must now publish the full ICO audit findings and be open about its failings and roadmap to fix them. This would be a first step towards restoring professional and public trust in its national pupil data handling.

The Schools Against Borders for Children campaign gained the support of a wide range of supporters and we appreciate every one’s contributions. Through our collective action together with thousands of parents, pupils and school staff in the 2016-18 boycott of the expanded school census data items we have all achieved incredible change. 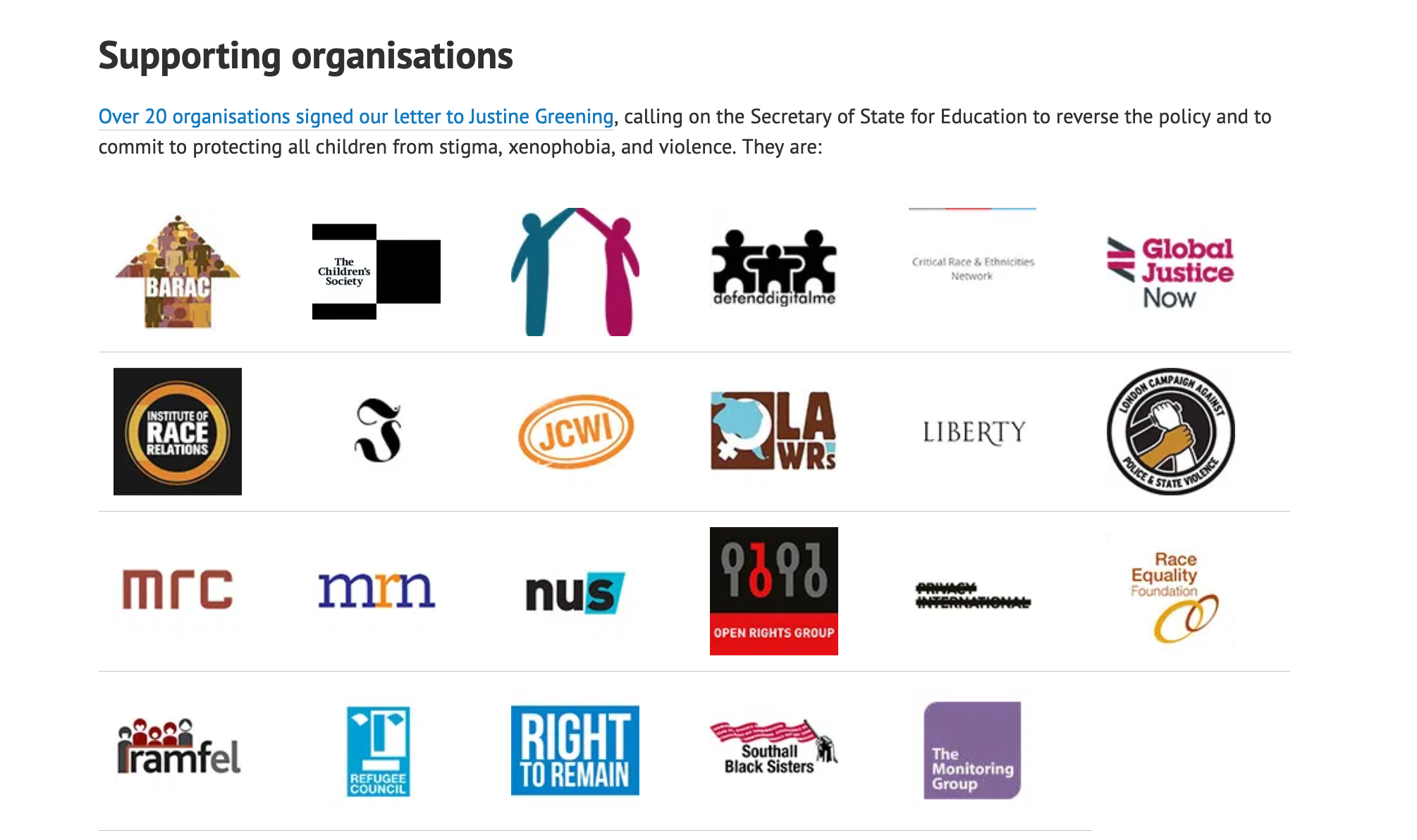